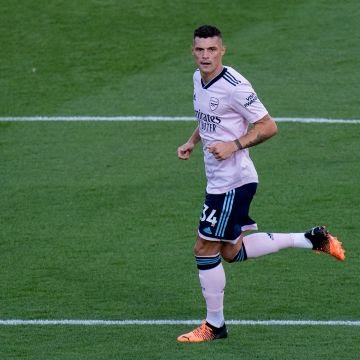 The midfielder reportedly forced a yellow card in the Gunners' victory over Leeds.
Swiss and Arsenal midfielder Granit Xhaka is being investigated for possible involvement in a betting scheme, according to the Daily Mail.
The publication points out that England's National Anti-Crime Agency turned its attention to the player after a bet of R$ 321 thousand was made on the fact that he would take a card in the final stretch of the rout over Leeds by 4 to 1, by the Premier League.
CLICK HERE AND SUBSCRIBE TO HBO MAX TO WATCH ALL CHAMPIONS LEAGUE GAMES!
The value of the bet caught the attention of the authorities, who began to investigate the case.  At the time, Xhaka took a long time to take a free-kick, already at 41 of the 2nd time, and received yellow for the "wax".
The British authorities point to a possible involvement of the Albanian mafia, the country of origin of Xhaka's family, and a former player, Alban Jusufi, who has already been suspended for five years by the Swedish court for having been involved in manipulations involving sports betting.
Despite this, Xhaka has been playing for Arsenal and was a starter in the club's Premier League debut, playing the full 90 minutes in the victory over Crystal Palace.