OVER €300 MILLION COMING TO CLOSE LEWANDOWSKI AND OTHER BUSINESSES - Moztimbila 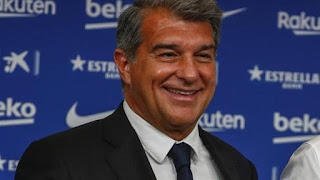 The money is coming to Barcelona, ​​proof of that is having announced this Wednesday the beginning of an agreement with Leeds by Raphinha.
Next week, the club will sell a percentage of a second economic asset (called 'palanca' in Spain), which can guarantee the club a liquidity of between 320 and 330 million euros, with 400 thousand in capital gains, and thus close market operations that it has open, namely that of Robert Lewandowski with Bayern Munich.
The club agreed to sell 15 percent of television rights to investment firm Sixth Street, to whom it had already sold 10 percent, securing around €200 million at the end of June.  It is recalled that the club had already agreed to sell 49.9 percent of 'Barça Licensing and Merchandising'.  Barcelona is thus more relieved in the necessary balance in the salary bill, since it was at the 1/4 level and now it will be able to move to 1/1 – that is, for now Barcelona had to release four euros to pay one, now it will be able to be one in/one out.
But not all the money will be for hiring.  Barcelona still has considerable debt and part of this liquidity will be for repayments.  However, the Lewandowski, Azpilicueta and Marcos Alonso businesses could move forward.  And Kessié and Christensen, already introduced, can be registered.  As for Bernardo Silva, it remains a complicated dream.
President Joan Laporta said a few days ago that the "wordy" players were waiting, and again asked for patience.
“A part of the money will go to reduce the debt, another part to invest in a more competitive team.  We have to have a positive balance", he said in Kessié's presentation on the 6th.
Next Post Previous Post
No Comment
Add Comment
comment url
Barcelona,Desporto