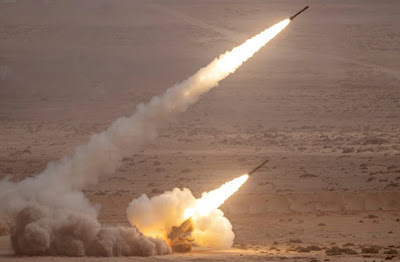 Supplied by the US, the Himars system has already managed to destroy 20 large Russian ammunition depots and command posts.
The Himars (High Mobility Artillery Rocket System) precision missiles that the United States supplies to Ukraine have given its army a new boost on the battlefield, tipping the balance against Russia, which may pressure the country to stop its offensive, according to experts.
Since mid-June, Ukraine has managed to destroy more than 20 large Russian ammunition depots and command posts using the Himars, targets that were previously beyond the reach of traditional artillery.
Videos posted on social media show explosions at ammunition depots, especially in Lugansk, New Kakhovka and other Russian-controlled locations, testing the power and accuracy of this new weapon.
"The invaders have already been able to feel what modern artillery is like. They will not have any secure rearguard on our territory," said Ukrainian President Volodymyr Zelensky.
Experts believe that these new systems are not a permanent solution and that Ukraine needs more weapons and radar systems to defeat the Russians.
For analyst Christopher Dougherty of the Center for New American Security think tank in Washington, the Himars do not disappoint.
However, he adds, "the gun itself doesn't change things."
Greater precision
The M142 Himars (High Mobility Artillery Rocket System) is an armored mobile rocket launch platform that can carry 227 mm GPS-guided missiles with a range of about 80 kilometers.
Unlike the rocket systems that both sides used in the war, Himars missiles can be aimed at precise targets, making them more reliable.
Ukraine currently has 12 such systems that can launch six rockets at a time and hundreds of ammunition.
In addition to being highly accurate, these rockets fly low and fast to avoid Russian air defenses.  And with their enormous mobility, they are very difficult to track and destroy.
"The Himars are changing the fighting in Ukraine. It allows the Ukrainians to attack the Russians from a greater distance and in areas that were inaccessible due to Russian air defenses," Mick Ryan, a retired Australian general and analyst, said on Twitter.
It's not just the Himars, since June Ukraine has had high-precision artillery supplied by other allies such as French Ceasar howitzers, and last week the United States announced that it could supply 1,000 rounds of new precision-guided artillery.
;Ryan adds that with this Ukraine focuses on attacking Russian weak spots, such as ammunition depots near railways and in places relatively close to the battlefront.
Eventually, the Russian military will adapt and position its depots further from the front lines, analysts say, but that will complicate its logistics.
Also, the number of Russian trucks decreased because of the war.
Phillips O'Brien, a professor of strategic studies at St Andrews University in Scotland, says the Himars systems are part of a broader strategy to target Russian logistics and force them to delay their air defenses.
That would leave Russian artillery on the front line, Moscow's main offensive card, less protected from Ukrainian air and ground forces.
Longer range missiles?
Meanwhile, Kiev pressures Washington to supply Himar-compatible ATACMS missiles with a range of 300 kilometers.
"Our authorities are negotiating at all levels with US representatives on the need to provide us with missiles for the longer-range Himars," said Fedir Venislavskyi, a Ukrainian lawmaker.
So far, the White House has denied the possible use of certain weapons to attack targets inside Russian territory, which could lead the United States and NATO directly into war.
Dougherty argues that the US doesn't have many ATACMS in its stock and production stopped several years ago.
O'Brien estimates that, in addition to the Himars, what Ukraine needs is more protection from Russian air strikes.  "Giving Ukraine more and better anti-aircraft capabilities should be as much a priority as providing long-range weapons," O'Brien wrote on Twitter.
Next Post Previous Post
No Comment
Add Comment
comment url
News