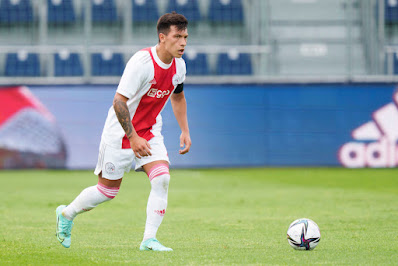 Manchester United has already confirmed two reinforcements for the European season with the arrival of Tyrell Malacia and Christian Eriksen, and is now very close to signing another player. This Saturday (16), the European press advanced in the information that the English club accepted to pay a millionaire amount to Ajax to count on the Argentine defender Lisandro Martínez, 24 years old. The player should be the third reinforcement for Erik ten Hag's team.
The negotiation to count on Martínez is around 54 million euros (about R$ 294 million at the current price), but it could reach 64 million euros (R$ 348 million) in the face of some bonuses provided for in the contract. If the defender manages to achieve the goals that were set, Ajax will receive an additional amount for the negotiation. The official announcement of Lisando Martínez should happen in the next few days.

The arrival of the Argentine player was a special request from coach Erik ten Hag, who has worked with the player for the past three seasons at Ajax. Under the coach's command, Lisandro Martínez consolidated himself in the Dutch club's defensive system, having made 120 appearances for Ajax. Last season, the athlete played 37 games, scored a goal and provided an assist.

The arrival of Lisandro Martínez brings new options to Manchester United's defensive system, which started the pre-season with a defensive duo formed by Raphael Varane and Victor Lindelof in the friendly against Liverpool last Tuesday (12). With the presence of the Argentine, Manchester United will be able to release players who are no longer part of the plans such as Eric Bailly and Phil Jones.

With the amount paid by Lisandro Martínez, the Argentine player becomes the ninth most expensive defender in the history of the Premier League, surpassing the 52 million euros paid by Manchester City to Porto, in 2014, in the hiring of French defender Eliaquim Mangala. According to the Dutch newspaper "Telegraaf", Ajax has already secured a replacement and will pay 20 million euros for the Nigerian Calvin Bassey, from Rangers, Scotland.