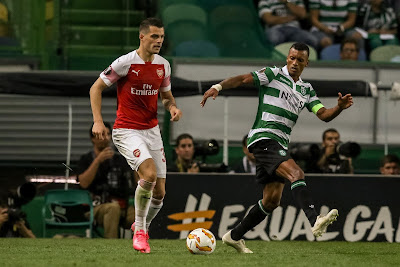 Often criticized by Arsenal fans, Granit Xhaka opened his heart to talk about this complicated relationship that, from the midfielder's point of view, has been improving.  The great episode that symbolizes this malaise dates back to 2019.

At the time, the Swiss international was whistled by the fans, who were against the fact that the midfielder had won the captaincy, when he was substituted, in a game against Crystal Palace, for the Premier League.  Xhaka didn't react well to the jeers and provoked the adept mass, applauding the whistles and taking off his shirt on the way out of the pitch.  The 29-year-old player went to the locker room without going through the substitute bench, visibly upset.

After three years, it seems that the spirits are healed and the relationship has improved.  "Everyone knows about that period I spent with the fans. A big misunderstanding, in my opinion, both on my part and on theirs. I play football because I have a huge passion. I've been at Arsenal for over six years. I love the club. , I love people", says the defensive midfielder, in an interview with ESPN, also identifying the main responsible for the continuity in Arsenal.

"Without him [Arteta] I wouldn't be at the club anymore. He helped me when I was down. He helped me with little things, step by step and he was also fundamental in my relationship with the fans."

The contract with the 'gunners' expires in 2024, but this factor does not seem to condition Xhaka, who is happy with the British emblem and just wants to enjoy football as long as he can.  "I'm very happy here. My family too. I have two more years on my contract, it's true. I'll be 30 in September, but I don't believe in age in football. You can be 18, you can be 90... If you have quality, you can play. Age for me is just a number", concludes the Swiss.