FULL OF VICTORIES WITH CÉDRIC AND TAVARES IN ELEVEN - Moztimbila 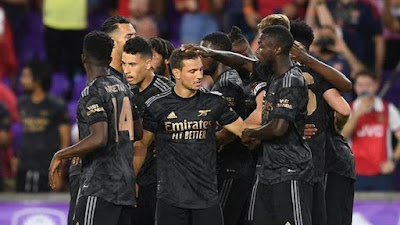 Arsenal beat Orlando City 3-1 last morning at Exploria Stadium, in a Florida Cup game, part of the Gunners' tour of the United States, with the kick-off being given an hour and a half late due to to a storm that made itself felt in Orlando.

With the Portuguese Cédric Soares and Nuno Tavares, the English team opened the scoring after five minutes, through Martinelli.  Orlando City — with left-back João Moutinho, 24, was substituted at half-time — were not intimidated and Argentine Facundo Torres scored the equalizer (29’), a result that happened at half-time.

In the complementary stage, Arsenal had complete control of operations, translating their superiority into a goal, with signatures from Eddie Nketiah (66’) and Reiss Nelson (80’).

It should be noted that Fábio Vieira, midfielder that Arsenal bought from FC Porto this summer, was not an option as he was recovering from a touch he suffered during training.  This was the fourth victory for the gunners in as many preparation games.  Namely: Ipswich (5-1), Nuremberg (5-3), Everton (2-0) and Orlando City (3-1).

Arsenal return to action next Saturday, against Chelsea, in the Florida Cup final game.