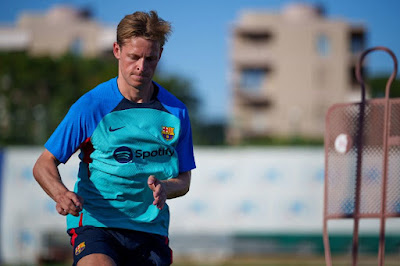 The Barcelona squad has already left for the United States, where they will play a series of friendlies before the official debut of the European season. Among the names in the delegation are the reinforcements Raphinha, Christensen and Kessié. Dutchman Frenkie de Jong was also listed for the preparatory games, but is not guaranteed to be present for the season. The player's future will be resolved during the period and the departure of the 25-year-old is key to adjusting Barça's financial issues.

The main interest in Frenkie de Jong is Manchester United, which has already made an official proposal to have the player. However, the Dutchman has no intention of moving to the English club and wants to continue his career at Barcelona. This issue should be resolved in the coming days with the definition of the athlete's future, who may not remain in Xavi Hernández's squad.

According to information in the Spanish press, the departure of Frenkie de Jong is essential for Barcelona to organize itself financially and be able to register reinforcements for the European season. In addition to Raphinha, Christensen and Kessié, the Catalan club announced Lewandowski and the renewals of Sergi Roberto and Ousmane Dembélé. All of these players will be eligible if Frenkie de Jong leaves to make room in the first-team salary bracket.

After the arrival of important players who were priorities in the new project, mainly Raphinha and Lewandowski, the Barcelona board will now move on to the second phase of negotiations, which includes the departure of some players who will not be used. This theme does not only involve Frenkie de Jong, but also players who have not even traveled to the United States and stayed in Barcelona to resolve their contractual situations.

In the pre-season final list, names like Neto, Umtiti, Mingueza, Riqui Puig and Braithwaite, who previously had plenty of space in the squad, didn't even appear. Barcelona has given all the necessary conditions for the players to follow a new path in their careers, as they will not be used during the season. The negotiation of these athletes with other teams is also a fundamental process for the registration of new players in LaLiga.