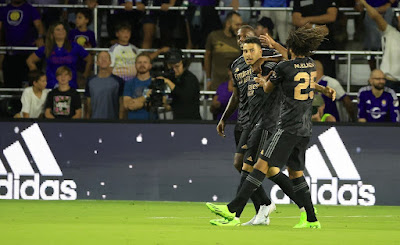 In the final stretch of pre-season, four major European clubs entered the field for friendlies in the United States last Wednesday night.  Manchester City, Bayern Munich and Arsenal won their matches, but Chelsea end up defeated.  Check the summary of the duels.

The game could mark the debut of Erling Haaland, City's main signing for the season, but the number 9 did not leave the bench.  Who played was also recently signed Julián Álvarez, ex-River Plate.

In the capital Washington, Bayern Munich faced D.C.  United and took no notice of the Americans.  Julian Nagelsmann's team won 6-2. The game marked the debuts of Sadio Mané and Matthijs de Ligt, who scored.

The Senegalese forward opened the scoring with a penalty kick, while the Dutch defender scored in the second half after a corner.  Gnabry, Sabitzer, Zirkzee and Müller completed the scoring.  Skage Lehland and Theo Dipietro made it for the owners of the house.

​Arsenal faced Orlando City, in the state of Florida, and beat the Americans 3-1. One of the highlights was Brazilian Gabriel Martinelli, who opened the scoring just five minutes after Lokonga's assist.

Another Englishman to take the field in the fourth was Chelsea.  In North Carolina, the Blues faced Charlotte and the teams drew 1-1 in normal time.  Pulisic opened the scoring in the first half, while Daniel Ríos left everything even in stoppage time.

In the penalty shootout, the hosts converted the five kicks, with Ríos, Makoun, Walkes, Mora and Jozwiak, and won 5-3. Gallagher wasted his kick for Thomas Tuchel's team.  Havertz, Chilwell and Sterling scored.