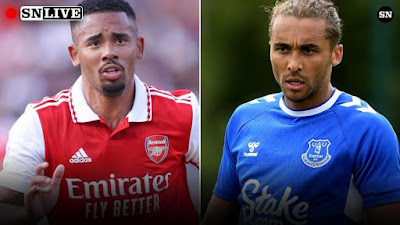 In one of the first all-Premier League clashes of the 2022 preseason, Arsenal and Everton will face off at M&T Bank Stadium in Baltimore in what is being dubbed "The Charm City Match," a nod to the city's nickname.

The match will be a chance to see some of both clubs' high-profile acquisitions in action, including Arsenal forward Gabriel Jesus, who will be a focus of new Everton center back James Tarkowski.

The Gunners already have two matches under their belt in preseason: a 5-1 win over Ipswich Town and a 5-3 triumph over German side Nurnberg. In addition to the Everton match, they will play Orlando City (July 20) and Chelsea (July 23) in the USA before returning home to face Sevilla at the Emirates.

As for Everton, the match in Baltimore will be the Toffees' first preseason test. They will next head to Minnesota to face the local MLS club managed by former Toffees star striker Adrian Heath (July 20). The other preseason friendlies on the docket back home in England include second-tier side Blackpool (July 24) and Ukrainian club Dynamo Kyiv (July 29).

Arsenal kick off their Premier League campaign and a quest for a top-four spot at Crystal Palace on Friday, Aug. 5. Everton will be in action on opening weekend at home to Chelsea.

The Sporting News is following the match live and providing live score updates and commentary.

60th min.: Everton's James Tarkowski with a sensational sliding tackle on a Gabriel Martinelli penetrating run and shot in the box.

56th min.: Much better start to this second half by Everton. The Toffees are seeing more of the ball. It's taking Arsenal a bit more time to get back into the game. Mikel Arteta is heard on the sideline urging his team to play simple.

46th min.: Second half is underway. Rondon tries to catch Matt Turner, who is way off his line, but Turner gets back quick enough to swat it away for a corner. Nothing comes of it.