ARSENAL SQUEEZES: THE MONEY THAT BENFICA TRYS TO FIT WITH GRIMALDO. - Moztimbila 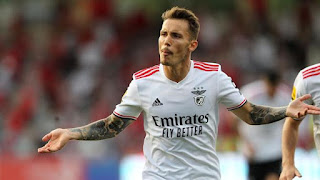 ARSENAL SQUEEZES: THE MONEY THAT BENFICA TRYS TO FIT WITH GRIMALDO.

Arsenal manager Mikel Arteta has defined Grimaldo as a top priority to strengthen the left side of the defence, something that will have already emphasized to those responsible for Londoners, writes The Sun.

For now, Arsenal has put on the table an offer of around €7 million.  Benfica tries to push the value up to €10 million, aware that the fact that the player has only one more year on his contract, which allows him to negotiate with any club from January 1, 2023, reduces the negotiating advantage.

Therefore, an intense round of negotiations is foreseen, and the Londoners want to take advantage of the presence of the Reds in England (they will be in Burton for an internship until Thursday) to speed up the negotiations and complete the dossier as quickly as possible.

In England, they also realize that Grimaldo welcomes the move to the Premier League