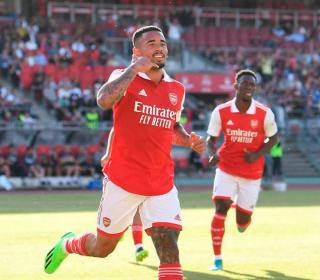 Emile Smith-Rowe, Arsenal midfielder, lavished praise on Gabriel Jesus during a press conference.  The Gunners' new number nine has impressed his teammates during pre-season friendlies.
He's been fantastic ever since he arrived.  Looks like he's been here for a few years.  Everyone knows how good he is and we can barely start to start (the season) with him.
Arsenal's number 10 also hopes that the passage of the striker of the Brazilian team by Manchester City can add and change the mentality of the athletes of Mikel Arteta's team.
Manchester City are a great club and they have won a lot in recent years.  It would be nice if he would bring that (winning) mentality and help us.
In two friendlies against Nuremberg and Everton, Gabriel Jesus scored three goals.  This Wednesday, the Gunners take the field against Orlando City, while the duel against Chelsea takes place on Saturday.
Next Post Previous Post
No Comment
Add Comment
comment url
Arsenal