Arsenal leaves at least three players behind to travel to the US, including Partey - Moztimbila 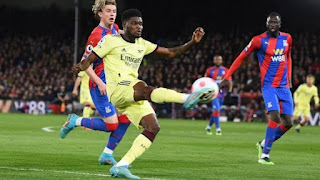 Arsenal left three players behind before leaving for the United States to continue preparing for the new season.
Mikel Arteta's side had a busy summer transfer window, having added a few new players to their roster.
The Gunners faced Nurnberg a few days ago and will continue their preparations in the US.
The Times, as reported by Football365, claims that Mikel Arteta left Thomas Partey, Bernd Leno and Folarin Balogun behind in London.
The three are expected to continue training at Colney while the rest are away for more pre-season preparations.
The report claims Leno could seal a move to Fulham in the coming days, and he was left behind to complete the transfer.
Balogun is also on loan following his temporary spell at Middlesbrough last season.
Arsenal opinion only
We need to prepare very well for next season because we have no choice but to succeed.
The least fans can expect from the team is to do better than finishing fifth in the last campaign.
A good pre-season will help us achieve this and will also give our new hires the opportunity to get used to their teammates.