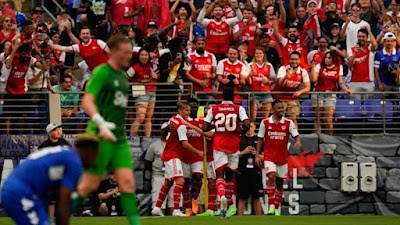 Arsenal remains sharp in pre-season.  In the United States, the Gunners got the better of Everton, by 2-0, and added three victories in as many games played and with 12 goals scored.
If on the Everton side André Gomes was not part of Lampard's choices, in London the Portuguese Cédric Soares, who even made an assist, and Nuno Tavares lined up in the first half.  However, the larger figure was Gabriel Jesus.  After scoring twice in his debut against Nuremberg, the Brazilian scored in the 33' and assisted for Bukayo Saka's goal, in the 36'.  In the end, coach Mikel Arteta did not get tired of praising the ex-Manchester City, who was hired this summer for 52 million euros: "He is capable of creating chaos. He is always in the right place to recover balls, always with an eye on goal . He already has a very good connection with his colleagues, I see characteristics of a leader in him. He is a real threat and exactly what we need."
Who remains out is Fábio Vieira.  The young Portuguese has yet to make his debut for the Londoners, something that has fans worried, but not Arteta: "He has a small problem with a bone in one of his feet, but we hope he returns to training this week."  The ex-FC Porto had already addressed the issue to 'The Athletic' and assured that the injury he contracted in June, while playing for the under-21 national team, is no cause for alarm: "It's a small problem, but I feel good . I'm not 100%, but I get better every day. In the next few days I'll join the team and train at full strength."
In the beginning of the North American tour, and still without the reinforcements Sterling and Koulibaly, Chelsea beat (2-1) the Mexicans of América.  Timo Werner (55') and Mason Mount (83') scored for the blues, with Reece James (60') scoring an own goal.