After Gabriel Jesus, Arsenal is attentive to the midfielder situation of another rival. - Moztimbila 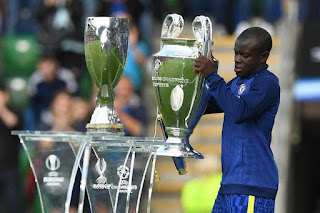 According to the British newspaper Daily Star, the Gunners look to N'Golo Kanté with good eyes, as his contract with Chelsea expires at the end of the 2022/23 season.

After the signings of Fábio Vieira from FC Porto and Brazilian striker Gabriel Jesus from Manchester City, N'Golo Kanté emerges as the next big name that could reach Arsenal.

According to the British newspaper Daily Star, despite being a fundamental part of the German coach Thomas Tuchel's scheme, the French international has only one more year on his contract with Chelsea and this situation could make him move from Stamford Bridge to the Emirates.

On the other hand, Mikel Arteta, the Gunners' Spanish coach, continues to ask for reinforcements and is fond of the qualities of the French defensive midfielder.